How to communicate your product launch

If a great product gets released but no one hears about it, did it really launch? We chatted to Marc Edwards from Bjango to get some advice on approaching a launch.

What did you find were the key elements for the success of your product launch?

For us, the most important aspects are trust and awareness. We need a long history of providing good software, and providing useful advice. I don’t think there’s a shortcut to a good software launch — it takes a lot of persistence, but we’re finally in a place where I think having our name on a product indicates a certain level of quality.

For paid updates, it’s essential to let all existing customers know there’s an update. We prefer doing this within the app itself, rather than email.

How did you sustain excitement throughout the launch?

For iStat Menus 6, we had a lot more launch material ready, including Dribble posts with some behind-the-scenes info, and lots of very specific tweets for each new feature. Those were spread throughout the launch week.

Next time we should do a lot more planning and have a schedule for discussing all the new features and why certain choices were made in greater detail.

After the initial launch, were there any other sales spikes?

There were spikes for the initial launch day, 14 days later when the trials ended, and for an email we sent out. Minor updates usually get a small spike, too. So it’s a good idea to fix lots of bugs and provide an update a couple of weeks after launch (bug fixes are good anyway!).

How to word your launch announcement

That was some expert advice on the whole launch but what about your initial announcement? When launching, you want to build anticipation for the release. That’s why it's important to showcase passion and excitement when announcing that your product is finally here. Your announcement should be short, clear and catered to your audience; be ready to emphasise specific features that would entice them to upgrade to your newest version.

“Showcase passion and excitement when announcing that your product is finally here.”

Let's break down Realmac’s announcement of Rapidweaver 8, from the first paragraph they directly addresses their customers. Instead of trying to sell the update straight away, they present a story of how much time and effort they’ve spent on the upgrade. It helps give personality to the app and shows there are human faces behind its development. 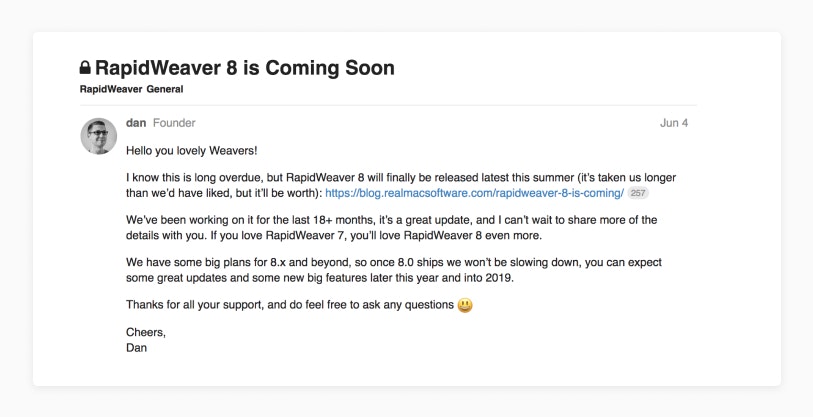 Realmac hype up what this new update means for the app (“it’s going to be our most significant release yet”) , but then back up this claim by how they’ve earned people’s trust through years of experience (“been around for 14 years ! ”) .

They then talk directly to the reader again about how they listen to feature requests, but then acknowledge how they can’t fulfill every request. This is a way of managing expectations by demonstrating that the want to deliver a product, rather than delay over superfluous features.

Realmac also preempt the question of whether they’ll shift to subscriptions, with this latest update. When there’s been a big shift in the industry it's always good to address your stance, whether you’re changing or keeping things the same. It stops customers being in the dark and allows you to explain the reasons behind your decision.

In the closing paragraphs Realmac entice people with what they’d learn about if they signed up to the newsletter. In a post-GDPR world people have no obligation to subscribe to your newsletter, so it's always key to make them aware of its worth.

Now let’s look at the Framer X launch video; this works well because the product is really polished and well designed. They’re marketing themselves to a design-orientated audience, so demonstrating that the interface is seamlessly smooth is key. The text is minimal, only serving to give the big-picture info of the name, release date and that they’re taking on users for their waitlist. This teasing of a gateway before release only raises the excitement.

These two products handle their launch announcement differently, but both speak directly to how their customers want to be spoken to. For further reading on communicating to check out our guide on mobilizing pre-release email chains, which details how best to talk to your existing customers to entice them to upgrade.

How to position your SaaS business against a market leader: A conversation with Plausible Analytics Co-Founder Marko Saric
Chloe Dormand
Go-to-market

Going global: How and why localization is the secret to international success
Chloe Dormand