The game-changing growth strategies for SaaS: The five stars framework

SaaS is showing no sign of slowing down. With so much competition in the industry, how do you compete, survive and thrive as a new software business? To answer that, you need to understand how software companies really grow.

In our SaaS Commerce Trends: 2020 Report, we took a deep dive into the trends and tactics of thousands of software businesses on our platform to find out how SaaS businesses really grow. Through our in-depth research and interviews with hundreds of fast-growing SaaS leaders, it was a combination of different strategies that turned out to be the favorite formula for business growth. 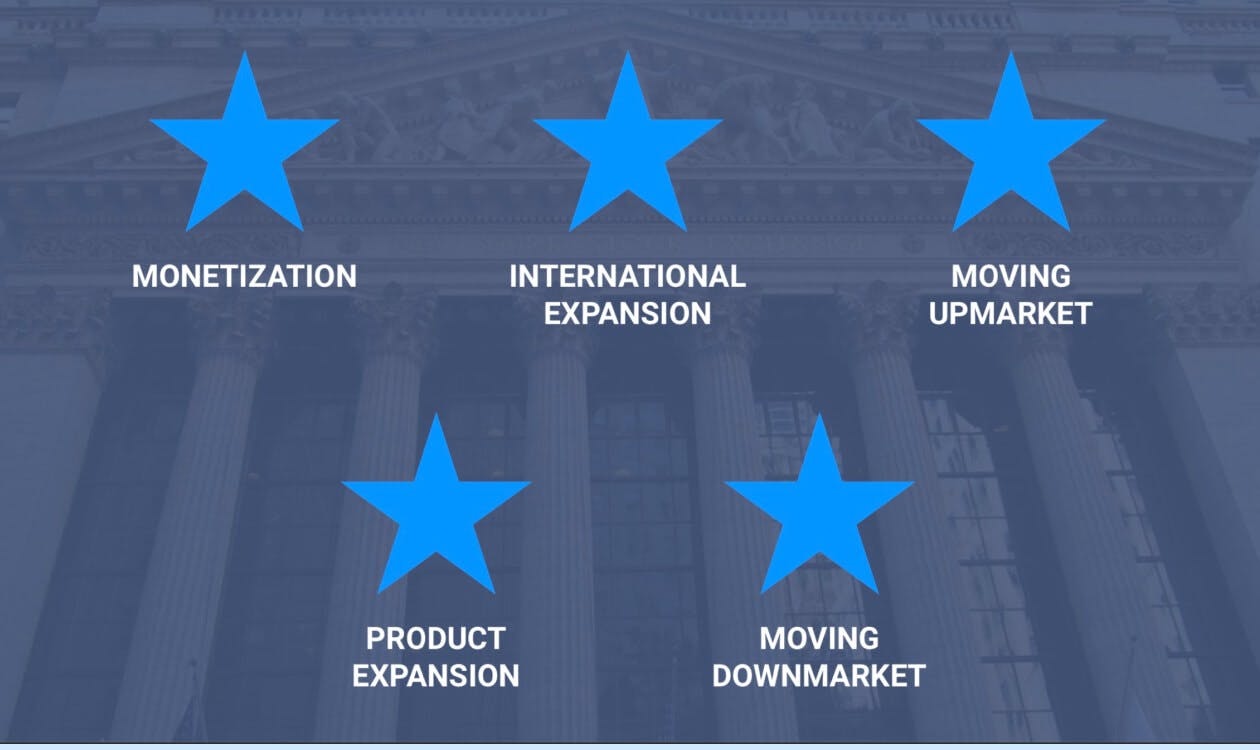 This strategic framework is all about combining the most common growth tracks we saw throughout our research. Introducing the growth stars:

If you’re looking to join some of the fastest-growing startups out there, it’s important to note that these growth stars don’t work in isolation. Piece them together and you’ve got yourself the ultimate SaaS growth strategy.

Of course, there are other proven growth strategies too that might work for software businesses like yours - we’ll talk about that a bit further down. 👇

Want to see how the five growth stars have seen software companies shine? Well, we’ve got some examples you *may* have heard of, all of which used the Five Star strategy in different ways to grow and expand.

How did HubSpot take on the Five Star SaaS growth framework?

✔ Internalization or moving into new markets - HubSpot launched its first office outside Cambridge, MA with “DubSpot” Dublin in 2012 to establish field sales and marketing, with more global offices and website internationalization following

✔ Moving upmarket - HubSpot historically avoided being pulled into the more competitive enterprise space, but focused on moving upmarket with the launch of Enterprise Suite from 2018

✔ Moving downmarket - HubSpot was originally only available through talking to sales. With the launch of the sales and CRM tools in 2014, a freemium offering was released as part of a new product-led go-to-market strategy

How did Shopify take on the Five Star SaaS growth framework?

✔ Monetization - Shopify started with just a percentage-based fee, but iterated in 2007 to include a tiered subscription pricing model with reduced fees at higher volumes

✔ Internationalization and moving into new markets - Shopify has long had sellers across the globe, but their current strategic focus is on diversifying revenue sources outside of the US, Canada, UK and Australia

✔ Moving upmarket - Shopify was dragged upmarket as sellers on the platform grew. In 2014, they launched Shopify Plus to better serve these growing businesses, as well as attract new larger businesses

✔ Moving downmarket - From the outset, Shopify was a self-serve offering for small and medium sized businesses. The future stream of SMBs comes from supporting entrepreneurship with campaigns like this (2017)

✔ Product expansion - Shopify’s expanding to cover more of the e-Commerce world’s needs, including Shopify Capital in 2016 and Shopify Fulfillment Network in 2019

How did Slack take on the Five Star SaaS growth framework?

✔ Monetization - Slack launched with a tiered, seat-based billing model with soft limits, like number of messages, that gradually drives an increase in average spend

✔ Internationalization and moving into new markets - Being freely accessible and with users in 150+ countries, Slack has mastered its localization

✔ Moving upmarket - With the seat-based pricing model, Slack was pulled upmarket. 575 customers were paying more than $100,000 annually, with this segment accounting for 40% of their revenue in January 2019. In 2017, they launched their ‘Enterprise Grid’ offering to better serve their largest teams

✔ Moving downmarket - From the outset, Slack focused on perfecting their product to maximise virality after public launch which they could monetize with a freemium model

✔ Product expansion - As Slack’s grown, they’ve focused on becoming the center of workflows with the App Directory, Slack Fund, and Bot Kit

Where to start with this framework

So, with five growth points to consider, which do you focus on first?

Software companies like HubSpot, Shopify and Slack didn’t get there overnight - they introduced each new strategy over time, building up to the ultimate Five Star approach.

But what does that path look like for your software company?

Through our research, we found it - almost always - follows the same pattern, depending on whether you’re a product-led or sales-led organization.

Product-led software companies, like Slack for example, will first maximize and then monetize their user base.

Introducing Freemium pricing models - where anyone can sign up - means that these companies can reach a global audience from day one to optimize their software for all the traffic and users that are outside their home market - that’s a tick for internationalization (✔).

As their user base grows, product-led software companies tend to grow best by selling through team plans and enterprise deals to maintain high year-on-year revenue growth. This takes on the moving upmarket strategy nicely.

Overlaying a sales-assisted motion to a product-led approach is what we call B2B growth sales. It can help you hit those five growth stars, and more. More on this specific strategy further down - don’t you worry.

Sales-led organizations, like Salesforce for example, will first need to find the pricing model that can be negotiated in a sales process, (including the value metrics their market understands). Hello, monetization ✔.

From there, the focus shifts to maximizing the size of the deals within that sales model with bigger and bigger accounts. You know what that means? They’re moving upmarket. 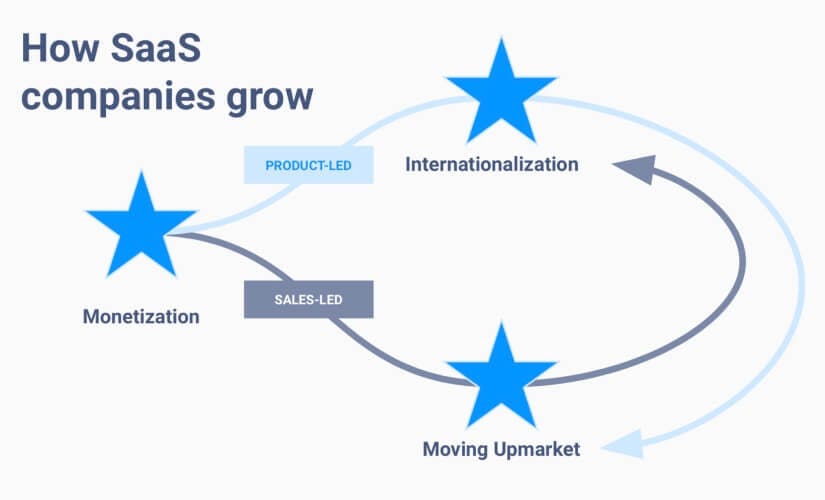 What are the biggest factors of SaaS growth?

Growing your SaaS business comes down to more than just the strategy plan (including whatever strategy or strategies you go for). If you want the hard work to pay off, that strategy plan should be applied to each of these elements for optimum SaaS growth:

Attraction - This is where your business proposition and general business model come into play. That includes your pricing and subscription models too, including Freemium and other deals to entice customers. What’s going to reel in prospective clients and keep your current clients on? What does your target market value? 🎣

Acquisition - How are you getting your name heard out there? Acquisition involves marketing and sales efforts, plus attention to the customer acquisition costs. If they’re higher than the money you’re getting in for each customer, it might be worth reconsidering.

Conversion - You want to maximize your number of conversions, right? Make sure the user experience is watertight, from clarity in explaining what you do and how you can help, through to a swift checkout (with no payment issues for all possible customers).

Retention - Here is the focus on keeping your customers happy and keeping up a high level of value for them and their businesses. That’s just a way to avoid the voluntary churn, though. You’ve also got the possibility of involuntary churners too, which can be easily avoided by ensuring your payment acceptance is up to scratch.

How Paddle can help you grow

Running a fast-growing SaaS business can mean that it’s hard to find the time and resources for all the above. Your revenue delivery strategy will make or break your growth plans, and if you’re not working hard on it, it’s probably going to be the latter...

As a provider of all-in-one payments infrastructure for software companies, Paddle does that hard work for you. We are specifically built for SaaS and we support businesses across all 5 growth stars.

By taking on the responsibility (and liability) of your payment and billing processes, including the headaches that are tax compliance and subscription management, Paddle leaves you with the fun and most important bit: optimizing and growing your business.

Back to resources
Growth

The State of SaaS 2022: A meta report
Go-to-market

How to calculate (and reduce) your churn rate