Revenue (not profitability) is what drives your SaaS company’s valuation. So while revenue infrastructure is not the sexiest part of a SaaS business, it is critical to its endurance – much like the foundation of a house. A weak foundation will have little impact for some time – maybe just a few cracks in the walls. But as your home gets broader and taller, a poor foundation leads to more and more problems. Eventually, walls start to buckle, and the entire foundation needs replacing at cost orders of magnitude higher than if it had been done right the first time.  The same is true for revenue infrastructure.  Early-stage SaaS businesses need to build a solid revenue infrastructure that will handle the company's future needs as it scales.

To explore how a cohesive revenue infrastructure can impact a SaaS businesses' valuation, we gathered insights from those closest to the valuation process, including SaaS CEOs and CFOs, accounting firms, investment bankers, private equity investors, and firms specializing in SaaS due diligence.

What is revenue infrastructure?

In SaaS, revenue infrastructure covers the myriad of things needed to collect money from your customers and accurately record revenue (and any associated taxes) on your books.  Depending on the particular SaaS company, it will include payments, billing, and sales tax compliance.  At its best, a cohesive revenue infrastructure reduces the friction of customer acquisition and retention by allowing customers to pay in any form (credit card, check, ACH, PayPal, wire), in any currency, and with or without an invoice.  “As SaaS CFO’s, we sometimes forget that our technology investment should not only improve internal operations but should also improve the customer experience," states Ben Murray, founder of TheSaaSCFO.com. In addition, it should be flexible and scalable to keep pace with new geographies, pricing, and customer types. Unfortunately, as SaaS CFOs will attest, most SaaS businesses' revenue "stack" devolves over time into numerous disparate systems connected and supplemented by a variety of Excel spreadsheets. 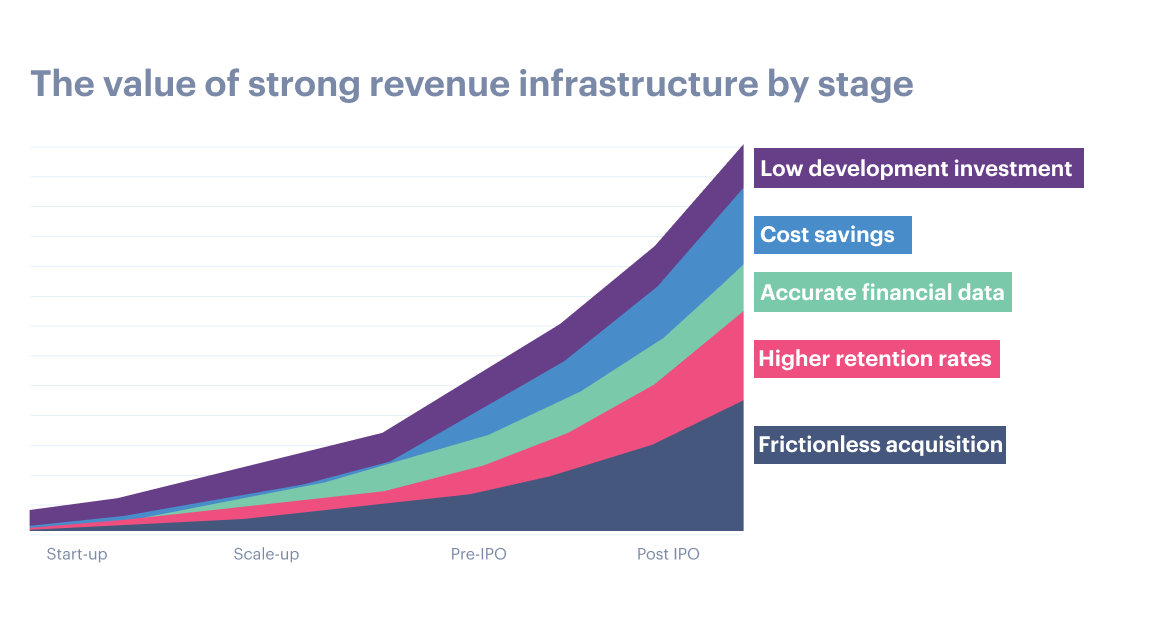 Start-up:  How does a cohesive revenue infrastructure help a start-up?

Like all businesses, start-ups need to generate revenue and collect cash. But knitting together systems for billing, collections, and taxes are the last place they want to or should be investing scarce development resources. According to multiple early-stage investors,  one hundred percent of a start-up's resources should be dedicated to building and refining a product that customers will buy.   Especially now, when the SaaS landscape favors Product-Led-Growth companies, the quality of the product itself should be the singular focus of a start-up.   Leveraging third-party technology in critical but non-core functions like payments and sales tax will maximize the likelihood of success.

Scale-Up: How does a cohesive revenue infrastructure help an early-stage business?

Once a SaaS business has achieved some level of product-market fit, revenue growth and customer retention will determine its value.  A revenue platform that eliminates friction from the buying process will increase growth.  Think of the hundreds of millions of dollars Amazon has invested in streamlining the check-out process for consumers. Removing purchase friction and adding incremental new customers increases your company's valuation exponentially because it increases both your MRR and your growth rate.  Based on the latest public SaaS data from the Bessemer Cloud Index, a one percentage point increase in a company's growth rate translates into a .5 increase in the valuation multiple.  For a $5 million ARR SaaS business, the valuation increase would be $2.5 million.

Then there's the importance of Net Revenue Retention (NRR) to the success and valuation of a SaaS business. Mathematically, NRR has an even more significant impact on a company's valuation than new customer acquisition.  A single percentage point increase in NRR leads to a 28% increase in valuation over five years. In addition to making renewal payments more frictionless, the most direct way revenue infrastructure impacts NRR is by maximizing payment authorization rates. Not all payment processors route their transactions the same way, and some processors generate a surprising number of incorrectly denied transactions.  When a customer tries to pay, but the payment system fails (for example, a customer's credit card has expired), it creates an involuntary churn event. Involuntary churn is the worst-case scenario -- it destroys value by reducing NRR and creates ill will with your customers. These challenges are not insurmountable, but they require precious Engineering and Finance resources which takes time away from developing the core product and potentially extra cost.

Finally, when raising capital at this stage, there will be substantial diligence conducted on the revenue line items of your P&L.  As lenders at SaaS Capital, we tied invoices to bank accounts to recognized and deferred revenue. Clean revenue gives investors confidence in your financials and allows them to move faster.  Ben Murry goes further, "SaaS revenue recognition must be bulletproof.  If due diligence finds errors in our revenue accounting, then all of our financial data is questionable in the eyes of potential investors.  And while helpful when raising a Series A or B, it becomes imperative in the next phase of growth when raising Private Equity or preparing for IPO.

Preparing for private equity or IPO

Two things happen in SaaS businesses when they surpass $10 million in ARR and are preparing for a capital raise or IPO.  First, the demands on the company’s revenue infrastructure grow exponentially complex with scale, and second, the importance of accuracy in financial statements grows substantially.

SaaS businesses at this stage are expanding geographically to demonstrate a large Total Addressable Market (TAM). Geographic expansion introduces the need to support different languages, currencies, and payment types and stay on top of global sales tax.  In addition, companies at this stage also increase TAM by expanding the size range of the customers they serve.  This expansion requires self-provisioning and credit card swipes for SMB and invoices and paper checks for the enterprise.  Addressing all these complexities with a la cart payment, tax, and billing systems held together by spreadsheets is not scalable and leads to errors.  Taxes can go unrecognized, financial reporting gets slower, and it becomes difficult to tie revenue to individual customers and calculate performance metrics.

Amid this complexity, both Private Equity firms and IPO underwriters hire due diligence firms to scrutinize the financial statements of SaaS companies raising money. "Quality of Earnings" reports carefully investigate both the P&L and balance sheet with particular attention paid to the revenue line items.  Taxes are the other area of focus.  "We almost always find some sort of unrecognized tax liability during our diligence," said Jonathan Dick, a partner at Primus Ventures, a US-based Private Equity firm focused on SaaS.  These diligence reports are conducted in addition to any ongoing annual audits and are much more in-depth. For businesses going public in the US, the Sarbanes Oxley Act requires all financial reports to include a separate Internal Controls Report. This report shows that a company's financial data is accurate and that adequate controls are in place to safeguard against fraud.  The more automation that is in place in the revenue stack, the easier it is to demonstrate good internal controls.

The level of financial diligence on SaaS businesses has increased substantially in the last decade.  As valuations and investment sizes increase, more money is at risk, bringing more scrutiny.  There was also the cautionary failed acquisition of Autonomy by Hewlett Packard (HP) in 2011.  HP paid $11 billion for Autonomy, and one year later wrote off over $8 billion of the acquisition primarily due to revenue recognition irregularities.  The two firms are still in court.

As SaaS businesses mature in the public market, analysts expect to see margins improve as revenue reaches scale and possibly begins to slow.  As the sheer volume and variety of tasks your revenue stack needs to support grows, leveraging automation is the only option to create cost savings.  CFO’s need to carefully compare all the systems and people costs of the different revenue stacks available.  In addition, the importance of accurate financial statements is even more significant in the public market.  Public companies that restate financial reports can suffer catastrophic share price declines, especially if the restatement concerns revenue our understated tax liabilities. According to one Investment Banker, many fund managers have an automatic sell rule for companies with financial restatements.

A streamlined and integrated revenue infrastructure improves a SaaS business's performance and valuation at each stage of development. As SaaS businesses scale, robust revenue systems deliver different benefits at different stages, with the early-stage benefits carrying through to post IPO/exit. It's always beneficial, for example, to reduce buying friction and improve NRR.

As is the case with a house's foundation, it's easiest to implement an integrated revenue stack early on.  That said, many later-stage companies are finding themselves "ripping and replacing" to get to grips with the increased complexity and heightened reporting requirements that come with success. As painful as this sounds, it's often the best if not only way to take a company to the next level.

Back to resources
Operations 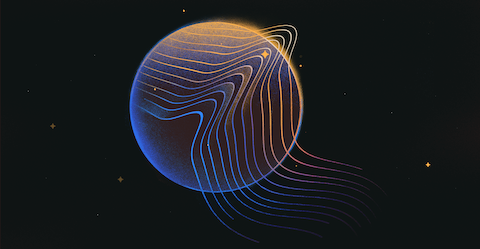 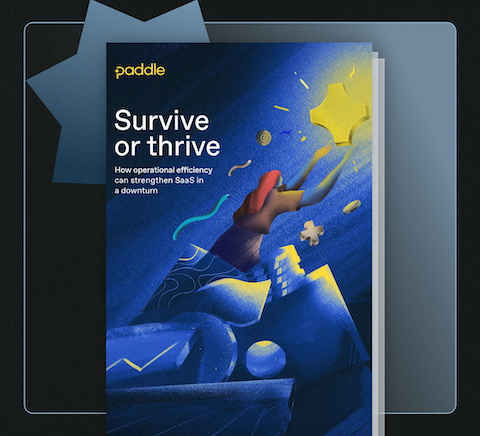 Introducing Survive or thrive: How operational efficiency can strengthen SaaS in a downturn
Chloe Dormand
Operations