Why SaaS churn rate is important and how to benchmark it

What is the churn rate?

Churn is the absolute number of customers that a business loses over a given period of time. It's a fundamental indicator of business performance, as it's often the result of a dissatisfied customer. Therefore, exploring the reasons for churn is the first step in mitigating it.

Typically, the churn rate is expressed as a percentage of the customer base. For example, a business with 100 customers in January, that then has 90 customers in February, can be said to have a customer churn rate of 10%.

Why is churn important for SaaS companies?

Put alongside new customer acquisition, your churn rate will quickly tell you if your existing customer base has, or is expected to, expand or contract.

For businesses running subscription models — such as B2C or B2B SaaS vendors — churn is not simply measured in customer numbers, but also in terms of recurring revenue. This is a crucial data point for making accurate financial projections. In such analysis, the revenue from a subscription customer (past and future) is split out over a given period of time (typically a month, quarter or over the course of a year.) In doing so, a business can account for not only churn in absolute subscription terms, but also falls in spending of retained subscribers.

Why stay on top of SaaS churn benchmarks?

In the dynamic and highly competitive SaaS markets, it can be hard to judge what constitutes a “good” SaaS churn rate. This is particularly true for startups that have little historical data to compare against, making churn analysis extra tricky. It's tempting for businesses to seek out industry benchmarks, and use those as gauges of success. But even if you leave to one side the accuracy of a given benchmark, there are fundamental challenges in comparing churn across different SaaS businesses.

In addition to the many variables that contribute to a business’ churn rate, there are actually a number of other SaaS metrics relating to churn to consider as well.

Exactly which are most useful to your business will depend on your stage of growth, revenue models, the markets you sell into, your growth objectives, and the reporting and analytics resources you have to work with.

Let’s take a look at some of these churn metrics and what they mean:

1. Subscribers: the easiest SaaS churn metric to understand is the numbers of subscribers you have, compared to a previous point in time. Variations include users (helpful for accounts with multiple users), consumption (how much of a service is being used) or logos (how many individual companies are clients).

2. Monthly Recurring Revenue (MRR): MRR ensures a SaaS business recognizes a subscriber’s revenue across the duration of their contract term, regardless of when payments are actually taken. Therefore, a customer with an annual contract worth £6,000 will have an MRR of £500. Recurring revenue can also be expressed in quarterly (QRR) or annual (ARR) terms. A falling MRR is usually a signifier of churn in absolute terms (i.e., subscriber numbers).

3. Net Revenue Retention (NRR): NRR (sometimes known as Net Dollar Retention - NDR) takes recurring revenue a step further by taking into account current customers who downgrade, pause, or reduce their consumption alongside those who churn. NRR is expressed as a percentage, with anything under 100% showing revenue contraction and industry benchmarks at 109%.

4. Average Revenue Per User (ARPU): ARPU divides the total revenue of all subscribers by the number of subscribers to determine how much revenue each subscriber is generating over a given period of time. A falling ARPU figure may not be evidence of subscriber churn in itself, but rather the loss of your highest-spending customers.

And here are two other metrics that, though not specifically churn, play an important part in any SaaS churn conversation.

5. Customer Lifetime Value (CLV): CLV is the profit you can expect to receive from a subscriber over the course of their custom. It is predictive, and therefore can be a complex calculation, depending on how many variables are considered. CLV is important to churn because it can point to how much of a priority churn should be. For example, you may be able to offset the impact of increasing churn with a growing CLV, all other things being equal.

6. Customer Acquisition Cost (CAC): The financial impact of churn is not just in lost revenue, but the cost of replacing the subscriber. A low CAC will tend to put less pressure on churn.

So, we know that benchmarking churn is a complex business. Let’s take a look at what that means in action:

b) Churn benchmarks by company age

Established companies with ARPUs in the $500+ range should have an average churn rate of somewhere between 2%-4% range. For early-stage companies still searching for product-market fit, though, it depends. High churn rates are common in the first year and can be as high as 24%. (Source: ProfitWell)

The upshot of this is that SaaS churn benchmarks, even by sub-sector, and even within a business, can be misleading. This can be overcome, but it requires significant analytical resources to set the right parameters and draw the correct conclusions.

A new way for SaaS businesses to think about churn.

Choosing from a limitless number of SaaS churn metrics, only to question what good should look like for your business, can quickly throw a strategy out of kilter. You begin to chase outcomes against one metric, only to find another churn indicator is suddenly heading in the wrong direction. Worse still, you may discover an inverse relationship between two metrics; as one improves, it has a direct and opposite impact on the other (e.g., retaining low-value subscribers will negatively impact ARPU.)

Instead, it's better to approach churn not as a single problem, but as multiple mini-projects, each with its own strategy and set of tactics. The following grid can be a helpful way to think about this. 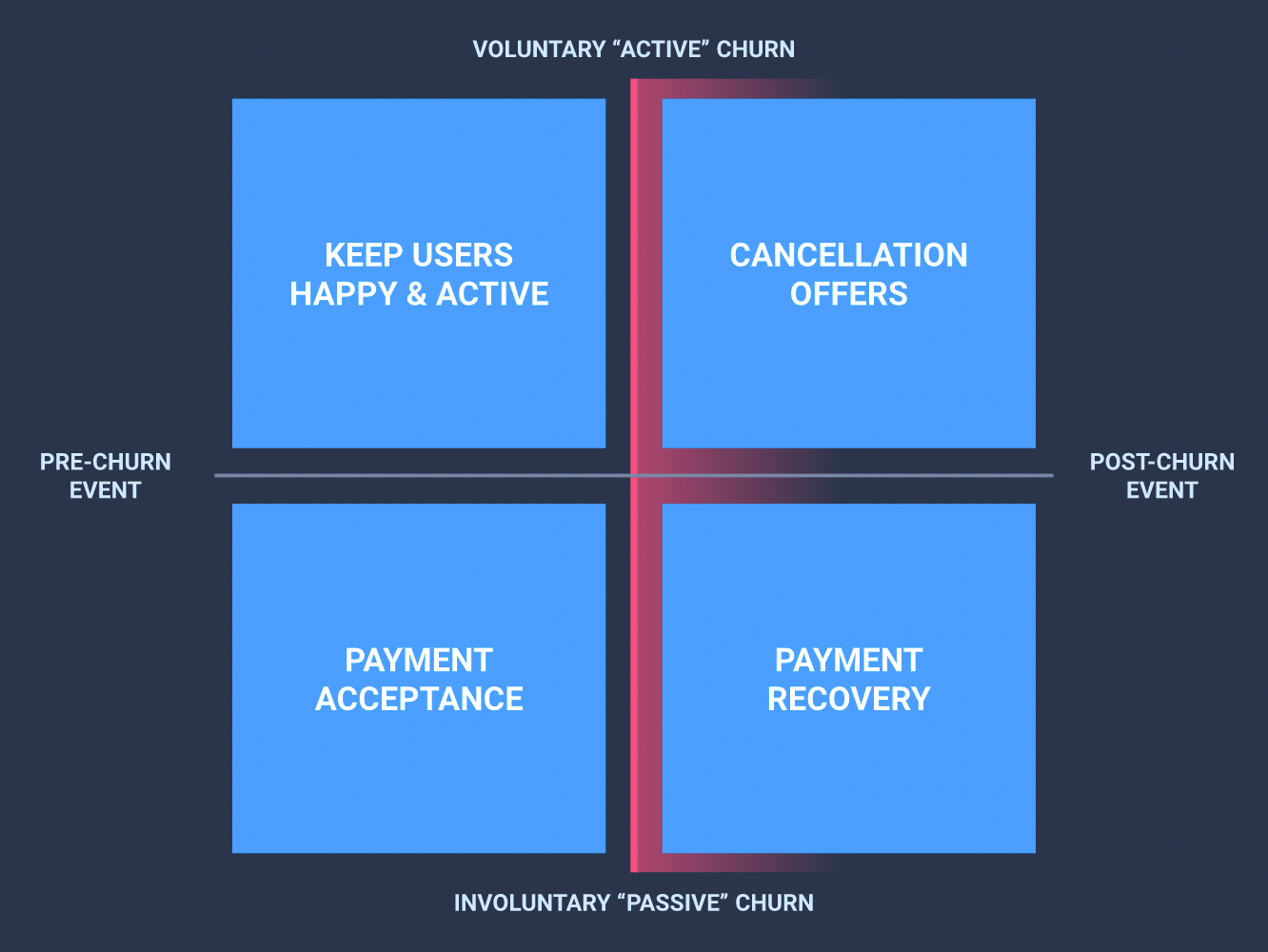 Each quadrant represents the intersection between a moment in time (i.e., when in the subscription lifecycle is the churn occurring?) and the subscriber’s intent (i.e., what is the cause of the churn?)

As we have said, churn is not just about falling out of love with a product. Other drivers of churn, such as CRM, subscription management, customer communication and payment management, need to be considered. None exist in isolation. For example, a CRM entry should include payment details and, ideally, automatically trigger communication to a customer if these are out of date.

This is difficult when you manage these processes via integrations with multiple tools across your payments infrastructure. Therefore investing in a unified revenue delivery platform that brings all these requirements under one roof to automate many interactions is an effective strategy.

Here are some ways in which an effective revenue delivery strategy impacts the SaaS churn rate.

Customers who intend to cancel their subscription can be persuaded against doing so. The issue for sellers is having enough resources to have that conversation in time. It's better if you can automatically funnel at-risk subscribers through a program of communications and engagements, which are tailored to the things you know about them and their likely reasons for wanting to leave you.

Sometimes, SaaS customers churn because they're faced with an all-or-nothing proposition; and on balance, nothing makes more sense. But sometimes, customers just want a little less of your service; sometimes over a specific period of time or to change the frequency of their payments so they're paying slightly less each time, but over a longer period. (And they can get equally frustrated if they want to ramp up consumption or pay more in fewer installments, but are unable to do so.) Giving customers not only greater choice in subscription packages, but also ease in switching between them, provides control and confidence in their ROI.

The biggest cause of involuntary churn is a payment failing because the payment details are incorrect. Here, card payments are a particular issue. Anti-fraud laws dictate that cards must expire after three years, and of course customers can lose theirs or have them stolen in the meantime.

Expired cards are relatively easy for a vendor to mitigate against because they know when the card will expire and can prompt the subscriber to update their details in time to take the next payment. This preemptive strike is not possible with lost and stolen cards; but timeliness in letting the customer know their card was rejected and directing them to update their new card details still makes a big difference.

Think — the email you get from Netflix that stops you from binge-watching that true-crime documentary until you update your payment details — that’s churn prevention in action.

Even with a strategy in place, some subscription payments will inevitably fail. It can happen for a range of reasons, other than an outdated card. One is the route a payment takes from the customer’s bank to the merchant’s bank. If that route crosses borders, where the two banking systems have little in common, the payment can be hard to reconcile and get flagged as suspicious, triggering an immediate stop to proceedings. But not all is lost. With access to the right technology, merchants can reroute the transaction through more accommodating intermediaries.

Letting customers pay how they want to is a good bet for keeping them happy. But that's easier said than done. Though the major card networks, bank debit schemes, and checks (in the U.S at least) still dominate, but alternative payment methods are growing in popularity. A competitor that offers a payment method that is favored by a customer may be all it takes for them to win business away from you.

But businesses that want to offer more payment options have two major challenges. Firstly, payment preference varies wildly across countries and sectors. Secondly, they aren’t always easy to access. Some require you to establish a legal entity in a specific country, some have minimum transaction volumes that must be met, and others require significant IT involvement to integrate them into your payment system. A unified revenue delivery solution is more likely to have multiple payment methods and currencies for you to access, without the need for yet more integrations.

Learn more about churn, and five strategies to reduce churn in SaaS businesses.

What is a good churn rate for SaaS?

What is the average churn rate for SaaS?

What is a negative churn?

Back to resources
Metrics & performance

More than reporting: How to draw (and use) meaningful insights from SaaS metrics
Chloe Dormand
Metrics & performance